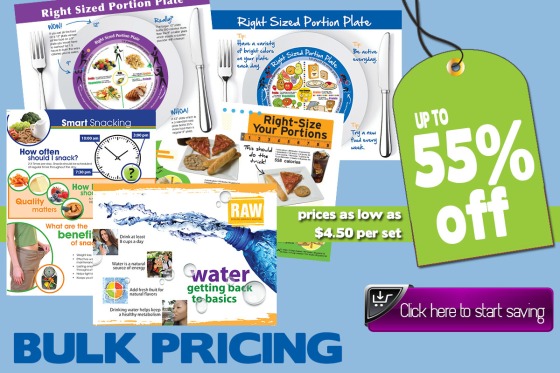 As Americans we love to celebrate. At any given point in the year we are amidst a special month, week or day set aside for awareness, commemoration or remembrance for a variety of causes, events and people. Usually I shake my head in amusement at every passing holiday but my attitude quickly changes at the start of national nutrition month. One day in March, registered dietitians get a chance at recognition and a time to shine. This year, it’s Wednesday March 13th.

Nutrition has long been regarded as an important part of human’s well-being. Over 6,000 years ago the Egyptian people believed that food was crucial to overall health. The ancient Indian and Chinese cultures used food as a form of medicine.  One of the founding fathers of medicine, Hippocrates, stated, “Let food be your medicine and medicine be your food”.  Leonardo Da Vinci compared metabolism in the human body to a candle burning. The now infamous first nutrition experiment done by the British physician, Dr. James Lind in 1747 found that limes prevented the deadly disease scurvy in sailors when included as part of their daily diet. Nutrition, however mysterious, mattered.

The science of nutrition and connection to health has been present much longer than the actual profession of dietetics. The 20th century was a time of great discovery in nutrition. The majority of vitamins and minerals integral to life were chemically isolated and named in the first several decades of the 1900s. As the science matured, the profession of dietetics broadened its reach. Dietitians were formally recognized as a profession in 1967 by the International Labour Office. And, yes, they declared the spelling “dietitian” not the nails-down-the chalkboard irritating “dietician”.

Even before the formal recognition of dietitians, the field was evolving just as fast as the nutritional breakthroughs in the early 20th century. In 1919, the first dietitian, Hallie Corsette, was hired by the US Public Health Service Divisions of Hospitals and assumed the title, “Superintendent of Dietitians”. Mrs. Corsette grew the division to include 85 dietitians whose focus was the food service operations of the Public Health Service hospitals.  World War II added more duties to the dietitian’s repertoire, including doomsday preppers and consultants.  For example, dietitians partnered with the Civil Defense Mobilization Program to protect the food supply and nourish the population if the United States were bombed. Dietitians were hired by state and local health departments to create nutrition clinics. By 1940 there was enough nutrition research available to establish the RDAs and dietitians subsequently began providing nutrition education to their clients.

As the demand for nutrition experts grew, the need for standardized education and training of dietitians became paramount. In 1974, the Academy of Nutrition and Dietetics (formerly American Dietetic Association) was recognized by the US Department of Education as the accrediting agency for dietetic internships and tasked with coordinating undergraduate programs. The responsibility of accreditation was shifted to the Commission for Accreditation in Dietetic Education (CADE) in 1994.

Registered Dietitians and the profession of dietetics is still in its infancy. Nutritional science is announcing new intricacies about the healing properties of food on a daily basis.   Treating disease with a healthy diet comes with the intrinsic benefit of prevention. Medical nutrition therapy is a powerful tool that lacks the laundry list of side effects seen in many pharmaceuticals treatments.  As registered dietitians we have every right to celebrate our leading role in combating chronic disease and translating the science into meaningful advice and guidance. Stand up and claim your day!

As I’m sure you’re well aware of by now, February is Heart Health Month. With all of the attention given these days to having the perfect figure, many people lose sight of the fact that the ultimate goal is not only to have a trim physique but also to have a healthy body, inside and out. Heart health is often a subject that gets ignored by most people when they are only concerned about the amount of calories and/or carbohydrates a certain food has. However, Cardiovascular Disease still takes the lives of 2150 Americans each day. (heart.org) One huge contributor to cholesterol levels are oils. Whether you’re cooking a dish, making your own salad dressing or baking some sweet treats, the type of oil that you use can have a direct impact on your cholesterol levels. So, how do you know which one to choose? Here are the top 3 most common oils and how they can affect your HDL and LDL cholesterol levels.

Olive Oil: In recent years, olive oil has gained in popularity, mainly due to its heart healthy properties. Because of its mix of antioxidants, olive oil can lower your LDL (bad) cholesterol without changing your HDL (good) cholesterol levels.

Coconut Oil: Although there is still a lot of research out about the exact health benefits of coconut oil, there are some general conclusions that tend to be the same across the board. As we’ve touched on in previous articles, coconut oil is becoming hugely popular (and controversial) due to its touted benefits. It appears that coconut oil does increase the levels of HDL (good) cholesterol in your body. However, it may also increase the levels of LDL (bad) cholesterol. So, do the pros outweigh the cons?

Vegetable/Canola Oil: Vegetable oil has long been a staple in American pantries. It’s the most commonly used cooking oil. Canola oil has only 7% saturated fat and works to lower your LDL cholesterol and raise your HDL cholesterol. That’s really a good combination.

Although there are many choices when it comes to cooking oils, it’s always important to remember that different oils will impact your overall cholesterol levels, both good and bad. An increase in total cholesterol isn’t always a bad thing. What’s important to focus on is your ratio of LDL to HDL. If you are facing a serious heart problem like cardiovascular disease or other risk of stroke, it’s important to consult a doctor about how to manage your diet. However, if you’re someone looking to get your whole body in shape, not just your outside appearance, start by paying attention to your heart health.

As a common component in the currently popular Paleo Diet, Coconut Oil has been getting a lot of attention lately. Because of its varying properties to Olive and Vegetable oil, it’s been given a lot of recognition as ‘the better’ option for cooking with. But, are there any side effects? Any other properties that may not be good for your health?

Olive Oil is currently leading the race as the top oil, both raw and cooked. Because of its fantastic flavor, lower amount of saturated fat (the bad stuff) and increased amount of mono-unsaturated fat (the good stuff), it’s long been known as a better option than traditional vegetable or canola oils. But, olive oil may have finally met some real competition in Coconut Oil. You see, when you consume most oils, you’re body treats them as a fat and stores them as such. But, Coconut Oil metabolizes to Ketone bodies, which are used for fuel; more similar to the way your body reacts to a carb. So, the potential energy benefits are part of what’s making coconut oil gain in popularity. The drawback is that coconut oil is 92% saturated fat, giving it a much higher saturated fat content than olive oil.

Our conclusion: Coconut oil is great for your skin, energy and many other parts of your body. It’s also proven that coconut oil is more heat stable for cooking. Where your olive oil will turn rancid when it reaches a certain temperature, coconut oil will maintain its flavor and freshness at higher temperatures. However, the long term health benefits and risks, including the risk to your heart because of the saturated fat content are still yet to be determined. So, we’re not quite ready to make the switch. Who knows what time will tell though!

Interested in learning more about trans fats or mono/polyunsaturated fats? Or, looking to teach your clients more about these nutrients? Click on the names above to view our educational tear pads that will clear up any confusion about fat and how it’s used in the body. 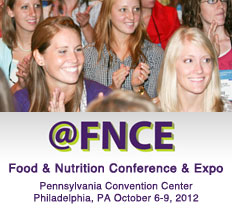 The AND Food and Nutrition Conference and Expo (FNCE) is kind of like Christmas in the nutrition and dietetics community.  Four jam-packed days of interesting education sessions, networking and foodie events, and the inevitable attempt to fit as many free samples from the Expo into our bags as possible.  But aside from the whirlwind of activity, what has and always will make FNCE the extraordinary experience that it is every year, is the energy, the people and the newfound sense of drive you feel every time you leave.
As part of the Executive Board of the Nutrition Entrepreneurs Dietetic Practice Group, our theme at the conference this year was “Declare Your Passion.”  I had the amazing opportunity to meet and network with registered dietitians who have found a way to take their passions and incorporate it into a career that is both emotionally and financially fulfilling– I’m pretty sure not many other professions can say that!  From supermarket dietitians, to authors, to social media gurus, to research experts (just to name a few!) there was never a shortage of colleagues to talk to and learn from.

FNCE is about celebrating collaboration, not competition.  This weekend I saw friends reconnecting, long-lasting business relationships being formed, and students interacting with their mentors.  We shared ideas, we asked questions, and we motivated one another.  The one buzz word that kept being tossed around to describe the 2012 FNCE experience was “inspired,” and I couldn’t agree more.
In essence, FNCE to me this year served as a reminder of how truly lucky we are to be in a profession where we can make whatever career we want.  There are no limits, there are no boundaries–we get to wake up looking forward to going to work every day!  I’ve already started outlining my 2013 “career to-do list” inspired by my interactions with fellow dietitians this weekend, and I can’t wait to experience it all over again next year in Texas!

NCES is your one-stop source for nutrition education. We've compiled the best health and nutrition materials available, including a comprehensive selection of books, manuals, videos,teaching aids and continuing education courses.

Click the image above to browse Expert Health and Nutrition Education materials.